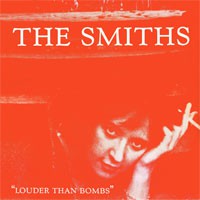 This was initially an America-only release, combining all the non-album singles The Smiths had released up until that point. It's "Hatful Of Hollow" (without the BBC stuff) and "The World Won't Listen" combined and beautifully sequenced onto what was originally a lovely double album. There was one new 3 track twelve-inch released after "World" in England though: "Sheila Take A Bow" and its superior b-sides "Is It Really So Strange?" and "Sweet And Tender Hooligan" are on "Louder Than Bombs", as is an ever so slightly different mix of "You Just Haven't Earnt It Yet, Baby". U.K fans didn't need this record, but we all bought it anyway, for the sleeve and the sequencing. Sad but true!

Andy says: The sun shines out of their behinds!