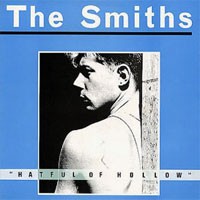 You'll know that The Smiths were prolific: all 4 of their proper albums were released in successive calendar years. But one thing that might have got lost with time is just how many non-album singles (with brand new b-sides too) they released. A mere month after each of their first 3 albums came out, there was a one-off single already heralding the new! With "Hatful Of Hollow" (Autumn 1984) there had been 2 twelve-inches (5 brand new tracks) since the debut album in March and the idea was to put these and the much loved BBC Sessions songs on one cheaply priced record. As some fans (and Morrissey too) had misgivings about the production of the debut, this was a good way to let people hear what many consider to be better versions. One of these songs was the incredible "This Night Has Opened My Eyes" which was never properly recorded by the band and is only available on this disc.

Andy says: The dream has gone but the music is real!!