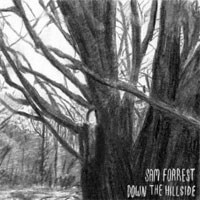 "Down The Hillside" is the debut solo album by Nine Black Alps' Sam Forrest. In spring 2008 Sam took time off to write and record a semi-acoustic album in his house in York, England. With the exception of backing vocals courtesy of singer-songwriter Hayley Hutchinson and drums by Alan Leach, all of the instruments were played and recorded by Sam which lend the album a stripped-back lo-fi atmosphere a world away from the hard rock sounds of Nine Black Alps.

Friends Of The BrideBuckle Up, Sunshine!

Its A BuffaloDivorce Song EP

The NouvellesSurrounded By Angels (Love All Around)