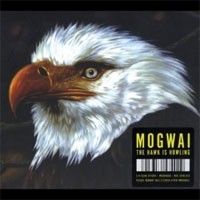 "The Hawk Is Howling", their sixth album, sees Mogwai return to a totally instrumental landscape, with many songs coming in at around the eight minute mark. A brooding and atmospheric collection, full of the band's exceptional use of dynamics and creation of hypnotic soundscapes, "The Hawk Is Howling" is, however, partly more reflective than previous releases, perhaps sharing more in common with 2001's "Rock Action". Instrumentally the band have somewhat branched out, utilising light synthesizers on tracks such as "The Sun Smells Too Loud". The album was recorded with Andy Miller at Chemikal Underground and mixed by Gareth Jones at Castle Of Doom. It's the first time the band have recorded with Andy Miller since they worked with him on their debut "Young Team". Artwork for the album is designed by Aidan Moffat.