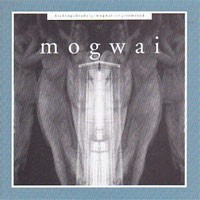 Coming from a band as prone to out-there weirdness as Mogwai, it should come as no surprise that many of the remixes on "Kicking A Dead Pig" bare little resemblance to their LP companions (mostly from "Young Team"). Though this collection of alternate versions introduces Mogwai to the sometimes shady world of remixes, rest assured that you are not likely to hear these tracks coming out of the speakers at your local mall clothier.

Highlights are Hood's ultra-low slung, ambient groove version of "Like Herod", DJ Q's take on "R U Still In To It?" which turns the funk up to 11 for an unsettling recasting of Mogwai as Scotland's answer to Daft Punk, and Max Tundra's "Helicon 2" mix, which almost completely inverts the track's soft/loud structure and adds some seriously damaged distortion effects.

The highlight of disc two is the 16-minute "My Bloody Valentine Remix", which at times ranges so far from the original as to suggest not only a different song, but that it was created by an entirely different order of creature than human.

The AssassinationsFuture Blasts From The Past