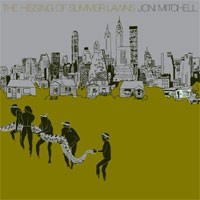 For many, the soft and crystal-clear voice of Joni Mitchell at the beginning of her career will remain indelible in their memory. The innovative style of her peaceful, folk guitar music caught the attention of David Crosby, member of the highly popular band Crosby, Stills, Nash & Young, and in 1968 he produced her very first album. Only three years later she became inspired by the cool flow of modern jazz and set off on new musical paths. "The Hissing Of Summer Lawns" represents a great leap away from the folk scene. Even the very first number, "In France They Kiss On Main Street", stands out thanks to its surprisingly unconventional melodic writing which is answered by powerful bass lines in a Jaco Pastorius-like style. Experiments with sound follow, such as the use of warrior drums of the Burundi and the growling sinus tones of the Moog synthesiser ("The Jungle Line") and then there is a whole line-up of minor-key songs behind whose jet-set foreground one finds a sophisticated jazz spirit. Even the final gospel-like singing ("Shadows And Light") contains little touches of the poignant melancholy which is found throughout the album. With her highly versatile, uniquely textured voice, which has often been compared favourably to that of Kate Bush, and her song texts whose lyrical depths are similar to Patti Smith's, Joni Mitchell has created a masterwork of the Seventies.