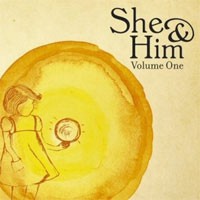 "Volume One" introduces a boy and girl choir making music the old-fashioned way: by hand and with as few machines as humanly possible. The She & Him story begins when in 2006 when renowned one man band M. Ward, recorded a duet with a girl named Zooey Deschanel. A delightful recording session, the experience led to a dialogue between the two about collaborating further. This, in turn, led to Deschanel admitting to secretly making dozens of home demos and hoarding them like acorns for the winter. Realising that if songs were acorns then this was indeed her wintertime, Deschanel sent the recordings to Ward and the demos became the basis for their first record, entitled "Volume One". Aiming to achieve the warmth and charm of pop and country records from the early and mid twentieth century, Ward, who also produced the record, and Deschanel, who wrote most of the music, called upon the help of a number of extraordinary musicians including: Rachel Blumberg, Adam Selzer, Mike Coykendall, Tom Hagerman, Peter Broderick, Mike Mogis, and Paul Brainerd.

She & HimA Very She & Him Christmas - 10th Anniversary Edition