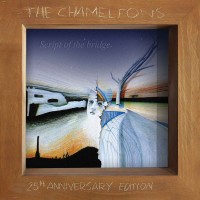 This is one of the greatest records ever associated with Manchester. Taking their drive, passion and earnestness from punk but with a songwriterly craft light years beyond, The Chameleons mixed swirly, echoey FX, heart-on-the-sleeve angst, and the most incredibly anthemic songs, to produce a far stronger album than say, U2, whose debut was in a similar vein to this record. This was a band you could truly believe in. They were never cool or fashionable, it was all about The Music and the connection. This 25th anniversary, 2 CD edition features updated artwork (by Reg!) a remastered, awesome sound, and new sleevenotes from Mark Burgess. It's absolutely brilliant!

The ChameleonsScript Of The Bridge - Remastered Edition

The ChameleonsWhat Does Anything Mean? Basically - 2CD Collectors Edition

The ChameleonsWhat Does Anything Mean Basically? - Remastered Edition