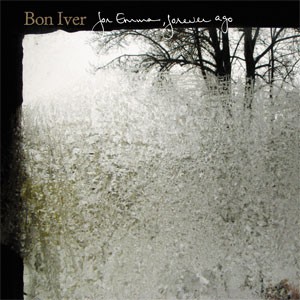 THE PICCADILLY RECORDS ALBUM OF THE YEAR 2008

I'm sure you all know the story of his album? So romantic, almost too perfect to be real: Justin Vernon (who?), a break-up, and a remote cabin. Four months isolation with only a guitar and a portastudio for company? Well, it's like a melancholy fairytale, because out of this has arrived one of the most honest and heartfelt records you're ever likely to hear. "For Emma" has received rave reviews but this shouldn't be confused with tiresome, music-biz hype. For one thing, the accolades all came after the record, and anyway, when you hear this album you'll just know that all the praise is deserved. Justin looks like he should be out chopping trees, sinking beers and hunting deer in the backwoods, yet he opens his mouth and an angel flies out! With a falsetto (a little reminiscent of the TV On The Radio guy) that soars on top of a super-ambient acoustic guitar base (Iron And Wine?) these songs evoke a bleak but beautiful sense of isolation that's hard to separate from the story behind them or the place in which they were recorded. Strings hum and twang, songs collapse and build again, there's footsteps on a wooden floor, multi-tracked harmonies, sparse electric guitar. Whilst far from groundbreaking ("For Emma" is refreshingly not part of any 'scene' and clearly the bloke has nothing to do with 'fashion') this is a unique and original record. A record, quite literally, out of nowhere. And if you're a fan of sad, thoughtful, melodic and atmospheric music, then you really are going to be blown away by this.

Darryl says: Another Piccadilly Records album of the year, I'm sure sure you all know the back story to this?? To recap, Justin Vernon spends four months in a remote cabin recording a break-up album, and the results are staggering! Beautiful melancholy for the bleak mid-winter.