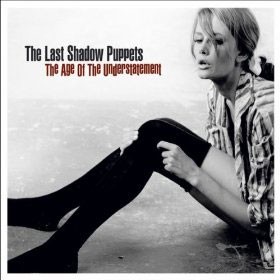 The debut album from The Last Shadow Puppets who are Alex Turner (from Arctic Monkeys) and Miles Kane (from The Rascals) who've been firm friends ever since Arctic Monkeys toured with Kane's previous group, The Little Flames. The pair were so inspired by listening to the likes of Scott Walker, early Bowie and David Axelrod, that they hatched a plan: They recorded the songs at Black Box studios near Nantes, France in two weeks during the summer of 2007, with producer and drummer James Ford (Simian Mobile Disco). The band then approached Owen Pallett (Final Fantasy) to arrange and conduct the orchestration of the tracks, which were recorded by the 22 piece London Metropolitan Orchestra at British Grove studios in London over Christmas. "The Age Of The Understatement", is an album of 12 full-blooded songs, bold and brassy, full of drama, wit and melody, that source the past but avoid falling into pastiche. Both Miles and Alex are 22, and this is a youthful record, full of life and the sheer pleasure of music making.