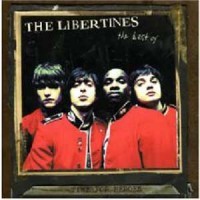 Bringing together the tracks that defined a generation, from their epochal debut "Up The Bracket" and feted, self-titled follow-up, "Time For Heroes" is a timely reminder of the unique talent of Albion's favourite sons Pete Doherty, Carl Barât, John Hasall and Gary Powell.
The album also includes ‘Don’t Look Back Into The Sun’ and ‘What A Waster’, which have never previously been available on either of the band’s albums.

The collection includes the classic singles ‘Can’t Stand Me Now’, ‘Time For Heroes’, fan picks ‘What A Waster’, ‘Boys In The Band’ and live favourites / B-sides ‘The Delaney’ and ‘May Day’.

The LibertinesAnthems For Doomed Youth