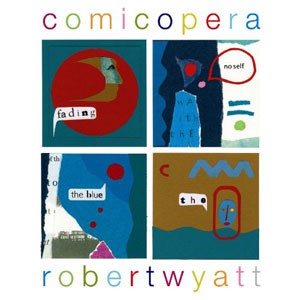 Robert Wyatt's first release for Domino is a modern classic, a widescreen vision of love songs, political statement and beautiful haunting melody. More light and live sounding than its predecessors, "Comicopera" is the sound of a group of musicians and friends (Anja Garbarek, Paul Weller, Brian Eno, Annie Whitehead, Seaming To, Monica Vasconcelos etc) playing in the room together. Wyatt is openly a fan of 'tunes', and the deep influence of songs such as "Raining In My Heart", covered on his last record, has perhaps had an impact on the melodies and compressed structures of these new performances: "Comicopera" feels like Wyatt's pop album. But the depth of the journey here, from start to finish, is magnificent, stopping off along the way for the sublime steel pan and sax battle of "On The Town Square", or for "Out Of The Blue", the frantic song of bomber versus bombed, featuring Brian Eno's sampled voice replayed by Wyatt on synthesizer, seems only to be expected in an album as enjoyable and ambitious as this.