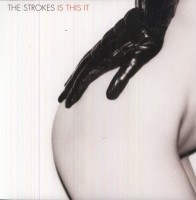 Released in July 2001, The Strokes' debut album completely rejuvenated the UK music scene. The excitement had begun in January with their Modern Age ep and a bidding war ensued for the band's signatures but they stayed with Rough Trade in the UK and opted for RCA  in the States.

The Modern Age was a lo-fi blast of New York garage/new wave rock'n'roll; cool as fuck, but seemingly not of its time. Put this with a strikingly retro,  skinny jeans and Converse, band- as- a-gang image( which is hard to believe but was in no way de rigeur in the early noughties) naysayers could well have been forgiven for thinking that this was just another indie band, here to do the rounds. Clearly they weren't and none of this mattered a jot. The Strokes made their time, and it was emphatically 2001

Led by songwriter Julian Casablancas and his distinctive slightly distorted/buzzed up vocals, the group presented a perfect selection of all killer/no filler, short, powerful and sweet. The UK in particular went ballistic and the record gatecrashed the charts at no.2. But their legacy was something else all together. Suddenly lo-fi garage rock was everywhere, and young people formed new bands just like in the old days. No Strokes no Arctic Monkeys etc etc.

The rest is history.  And it all started here.

Laura says: One of the most talked about debut albums ever, and yes it lives up to the hype! Eleven slices of NYC rock'n'roll genius.