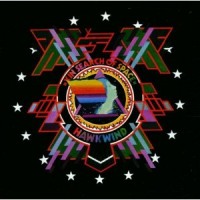 On Hawkwind's second album, the seminal space-rockers began to assemble the pieces that would come to be regarded as their signature sound. While some elements of leader Dave Brock's folkie past were still extant (most notably the surprisingly poignant "We Took the Wrong Step Years Ago"), the heavy guitar riffs, wooshing electronic effects, and science-fiction lyrics that typified the eventually predominant Hawkwind style all came into play on "In Search Of Space". Though bassist Lemmy (who would later found Motorhead) had yet to hop aboard the spaceship, Hawkwind's proto-metal tendencies were already apparent in the downright Black Sabbath-like "Master Of The Universe". The acid-damaged "Adjust Me" and the monomaniacal, one-chord jam "You Shouldn't Do That" attest to the growing freakiness of the band, a quality that would only continue to endear them to a hardy contingent of fans as their far-out tendencies increased.