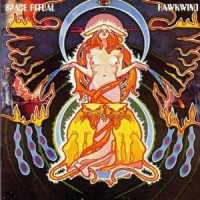 Featuring Hawkwind's classic line-up, which included vocalist/guitarist (and band constant) Dave Brock and bassist/occasional vocalist Lemmy (soon to depart and form Motorhead), 1973's "Space Ritual" is monolithic in stature and stands as the group's most impressive live (if not overall) recording. Although the ensemble often garnered comparisons to Pink Floyd, Hawkwind was far more aggressive than Waters, Gilmour, and company, charging through a potent, freeform set of cosmic freakouts (the trippy "Earth Calling") and rumbling metal ("Lord of Light" sounds like Black Sabbath in lunar orbit).

While the entire outing is stellar, the British space-rock group really hits a stride during the epic "Orgone Accumulator", which settles into a deep, acid groove. Although the spoken-word segments (most notably a recitation of sci-fi/fantasy author Michael Moorcock's "Black Corridor" by vocalist/poet Bob Calvert) might not suit everyone, "Space Ritual" endures as both a document of its era and one of Hawkwind's finest releases.