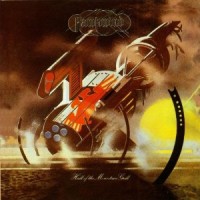 "Hall Of The Mountain Grill" found Hawkwind pushing the thudding hard rock of their early albums into the sci-fi influenced soundscapes that would define their legendary sound. In fact, this 1974 album is something of a prog rock classic, given everything from its futuristic cover to the sounds of mellotron, synthesizer, harpsichord, and flute interspersed among the overdriven guitars.

Hawkwind were pioneers in the first wave of space rock, and their sound often draws comparisons to Pink Floyd's music of the same era. But for all their cosmic meanderings and Tolkien imagery, Hawkwind rocked hard (Lemmy, who later went on to form Motorhead, was a member of the band), and "Hall Of The Mountain Grill" is full of driving, fuzzed-out guitar songs that perfectly balance the touches of ethereal psychedelia. With that in mind, this heralded effort should please fans of prog, psych, and early-'70s metal; and for fans of space rock proper - it's a must.