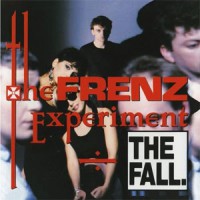 "After the dark morass of Bend Sinister, the sound of 1988's Frenz Experiment comes as a bit of a shock. The arrangements are spare and broken down to the essentials, with the distorted guitars brought down low and Wolstencroft's drums high in the mix. Marcia Schofield had also joined the band to add keyboards. With most of the songs credited only to Smith himself, this could be seen as a solo album of sorts, or an indication of some rift within the group -- it certainly doesn't translate into the music. For the first time too, his vocals are loud and clear, though certainly not comprehensible; "Bremen Nacht" hints at some sort of run in with a ghost in Germany, "Athlete Cured," with its Spinal Tap-borrowed riff, tells of a "German athletic star" made ill from unusual circumstances -- the narrative turns strange, then funny until wandering off, a classic Smith tactic. Their cover of the Kinks' "Victoria" marked the Fall's first entry into the British charts, but also fit in with Smith's continuing explorations of Britain's history and how it translates into issues of class identity. The CD contains their other two singles from this time -- "Hit the North" and a cover of R. Dean Taylor's "There's a Ghost in My House," which the group makes their own -- plus several B-sides." - AllMusic.

The FallThe Wonderful And Frightening World Of...