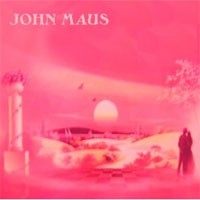 Better known as a core member of Ariel Pink's Haunted Graffiti and keyboard player with Animal Collective's Panda Bear, John Maus is a musician with a distinctive sound of his own. This is his debut release, his life work, which was written and recorded at home over the last five years.

The record is a manic lo-fi masterpiece, which blurs addictive melodies, emotive lyrics and dreamy soundscapes to memorable effect. Permeated by feelings of intense nostalgia, with this album Maus has created a testimony to lost romance and to longing.