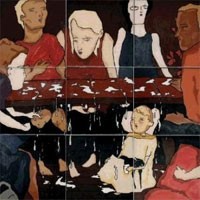 "Mr Beast" is the band's fifth album and the follow-up to 2003's "Happy Songs For Happy People" and was recorded in the band's new Castle Of Doom studio in Glasgow. As the title suggests, this is a record of considerable size and weight - a monster creation that started out as a return to the heady, bone-crushing volume and intensity of earlier recordings, and then mutated into a many headed, many mooded beast. It opens with "Auto Rock" - whose sweetly melancholic, central piano motif is gradually engulfed by a swell of fulsome guitars and pummelling drum beats - and closes with lurching, psych-rock behemoth "We're No Here". In between are eight future Mogwai classics, including the heads-down "Glasgow Mega-Snake", where what must surely be a dozen guitars swarm around a molten metal core like crazed killer bees, the drum machine-driven country gospel of "Acid Food", which features pedal-steel guitar, the wintry splendour of "Friend Of The Night" and the impossibly poignant "I Chose Horses", featuring guest vocalist Tetsuya Fukagawa (of Japanese hardcore band Envy) and a keyboard contribution from composer/arranger Craig Armstrong. Whether light and lean or dark and monstrous, however, these songs underline Mogwai's belief that to have meaning, rock needs both mass and monumentality. If "Mr Beast" has one thing, it's presence.