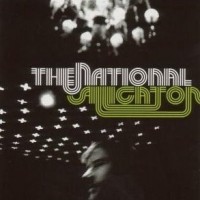 These five Cincinnati friends recorded two albums and a mini album for Brassland before signing to Beggars Banquet. Their last effort, "Sad Songs For Dirty Lovers", was touted as one of the year's best by Rolling Stone and other magazines.

The National contains two pairs of brothers - Aaron Dessner (guitars, bass) and Bryce Dessner (guitar), Scott Devendorf (guitar, bass), Bryan Devendorf (drums) and singer Matt Berninger. Matt's potent baritone intones about matters fraught and funny and sad; about record collections, missing persons and medium-sized American hearts. The songs are intense, and emotive but generally quite restrained, but on one or two tracks, this intensity spills out into a superbly abrasive blast of emotion, before ebbing back into mellowness. Wonderful!

Laura says: An absolutely awesome album - one of my albums of the year in 2005 when it was originally released. Although it's perhaps a little less 'polished' than "High Violet" it still has that same compelling, claustrophic intensity too it.