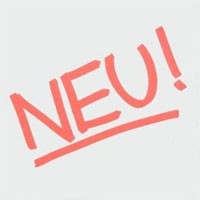 Fresh after leaving Kraftwerk in the fall of 1971 for what they perceived to be a lack of vision, guitarist Michael Rother and drummer Klaus Dinger formed their own unit and changed the face of German rock forever. Dinger's mechanical, cut time drumming and Rother's two-note bass runs adorned with cleverly manipulated and dreamy guitar riffs and fills were the hallmarks of the "motorik" sound that would become the band's trademark. Neu!'s debut album was driving music for the apocalypse in 1971.

Martin says: It is almost impossible to do justice to an album like this. The wellspring of the genre that came to be known as Krautrock - and possibly its finest hour - emerged from Dusseldorf in 1971, part of a cultural watershed marking the point at which a nation began to look to the future instead of over it's shoulder. The very definition of 'modern'.