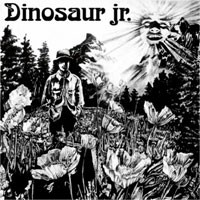 Coming out of Massachusetts in 1985, this album brought the young, socially inadequate and self-absorbed J.Mascis dimly into focus. Dysfunction always rocks and J's solution / release was to build a wall of noise, with unbelievably loud guitars which were sometimes hazy, sometimes sprawling. The results were mesmerising. Like an East Coast version of The Meat Puppets, there was loser folk mumblings mixed with lo-fi hardcore mixed with psych-metal mixed with nervy U.K new-wave and even Goth! Add Neil Young guitar sprawls and bingo: this is music you've never heard in your life before. This debut is ramshackle and hotch-potch in places, but beneath the noise there's plenty of clever songs mixing pretty melody with brutal power.

Dinosaur JrGive A Glimpse Of What Yer Not