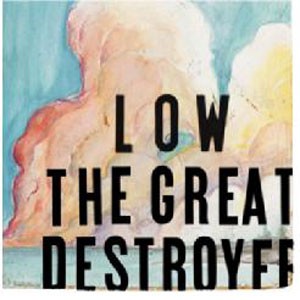 “From the ominous, post-punkish pulse and clang of opener ‘Monkey’, to the decidedly punky frustration of ‘Everybody’s Song’ and the unapologetic riffing of ‘California’, ‘The Great Destroyer’ pushes the band's sound on to thrilling new vistas” - The Guardian

Initially garnering attention as leaders of the ‘90s slowcore movement, Low went on to develop a sonic repertoire that incorporated pop, R&B and dissonant rock ‘n’ roll. With this kind of storied history, most people thought they had Low pegged. But then they turned in ‘The Great Destroyer’.

The band’s seventh full-length album, ‘The Great Destroyer’ is fascinating in that it blends the band’s austere melodies (‘On the Edge Of’, ‘Silver Rider’) with an aggressive guitar onslaught (‘Monkey’, ‘Everybody’s Song’) and even melds Low’s varied styles together into a single song (‘When I Go Deaf’).

Co-produced by Low and David Fridmann (Flaming Lips, Mercury Rev), ‘The Great Destroyer’ was a welcome surprise and, in the end, a rock ‘n’ roll revelation.