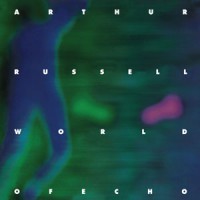 Rough Trade present a revised artwork edition of Arthur Russell’s seminal classic, ‘World Of Echo’ on CD in an edition of 500 copies.

The packaging is loosely based on the original LP cover art from 1986, now housed in a tri-fold digipack with a rare image of Arthur, plus liner notes.

Remastered from Arthur’s pristine original 1/4′′ sequenced masters, ‘World Of Echo’ sounds like nothing you have heard or will ever hear. 18 tracks are featured, including drumless versions of his disco classics ‘Let’s Go Swimming’, ‘Tree House’ and ‘Wax The Van’ along with four previously unreleased tracks from ‘Sketches From World Of Echo’.

Originally released on LP in 1986, ‘World Of Echo’ is a deeply intimate and meditative work of awe-inspiring grace and remains a timeless work of sublime beauty. Arthur’s aim was to achieve what he calls “the most vivid rhythmic reality”, with just cello, voice, and echoes. Arthur achieved all of this and more with ‘World Of Echo’.