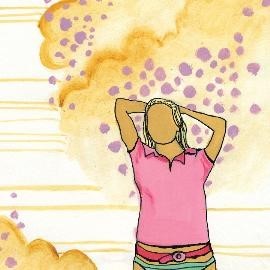 Noah Lennox, a.k.a. Panda Bear, a.k.a. one-fourth of the founding members of Animal Collective, has had a far-from-quiet few years since the release of his fourth solo record, 2011’s Tomboy. Since the breakout success of 2007’s universally-adored Person Pitch, each new Panda Bear release is a highly anticipated event, and with a high-profile Daft Punk collaboration later, that’s more the case than ever. But if the title of his fifth solo album as Panda Bear seems to portend certain doom, think again.

Taking his inspiration from 70s dub duo albums like King Tubbys Meets Rockers Uptown and Augustus Pablo Meets Lee Perry & the Wailers Band, Panda Bear prefers to frame his latest work as less of a battle and more a collaboration. “I see it [as] more comicbooky, a little more lighthearted” he says. “Like Alien Vs. Predator”. Young Prayer is the second full length solo album by Panda Bear. It was recorded in Panda Bear’s childhood home in 2002 by Deakin and further produced by the mysterious Animal Collective brothers known as Come Winter. It was originally released in 2004 on Paw Tracks as PAW2.