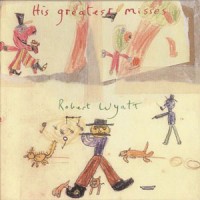 Currently selling for silly money on eBay, Domino have unearthed a limited quantity of this much sought-after collection of Robert Wyatt’s greatest moments. Previously released only in Japan as a limited edition, this 17 track album is the perfect introduction to the music of Robert Wyatt. This is the first real definitive collection featuring 17 of Robert's greatest all-time solo material recordings to date and includes the much sought after and requested "Shipbuilding" which has never previously been on an album and has only been available as part of the EPs box set. Also includes his only other hit single from 1974 - "I'm A Believer".

Robert WyattNothing Can Stop Us

Robert WyattRuth Is Stranger Than Richard