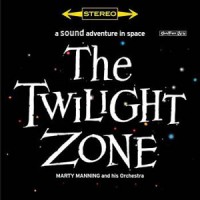 Originally out in 1960, this LP sees Manning and his orchestra mixing up woodwind, piano, guitar, percussion, vocals (by Lois Hunt) and electronic 'sorcery' (say the sleeve notes!) to make music for the cult sci-fi TV show. A must for fans of exotica LPs!

Limited edition of 300 copies. Marty Manning was perhaps the most-sought-after arranger and conductor among pop singers on the New York studio scene, but to Space Age Pop fans, he's best known for his album inspired by Rod Serling's great television series, "The Twilight Zone." Manning's The Twilight Zone featured new recordings of a variety of space-oriented tunes, with New York instead of L.A. session musicians, but those details have never seemed to matter to the fans who continue to scarf up copies of this record seconds after they hit the shelves.

A:
1. The Twilight Zone
2. Forbidden Planet
3. The Lost Weekend Theme
4. Invitation
5. You Stepped Out Of A Dream
6. The Unknown SIDE
B:
1. Far Away Places
2. Spellbound Concerto
3. The Sorcerer's Apprentice
4. The Moon Is Low
5. Night On Bald Mountain
6. Shangri-La