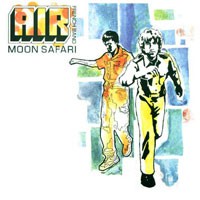 Air's Nicolas Godin and Jean Benoit Dunckel were a couple of cerebral keyboard geeks from Versailles, France, where they obviously don't get out of the studio much. Their space-pop debut, "Moon Safari", was a truly obsessive hommage to easy listening, a sublime Eurocheese omelet. They built their music out of classic 60s French schlock: bongos, castanets, vintage electric piano, dream-weaver synths and shag-carpet organ straight from the soundtracks of movies like Un Homme et Une Femme. The music is full of hidden jokes, as when "Remember" replicates the distorted drum intro from the Beach Boys hit "Do It Again"; Air's Brian Wilson allusion isn't some "Smile"-era obscurity - it's a beach-party blowout. Loads of American bands tried to emulate the fab tackiness of 1960s French pop. But Moon Safari proves that the French really do it better themselves.