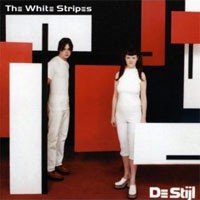 The band's second album, recorded on 8-track analog tape in Jack's living room, was released in 2000 and today is a cult classic.