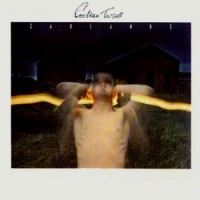 Formed by guitarist Robin Guthrie and bassist Will Heggie in Stonehaven in 1979 and with the addition of Guthrie's then girlfriend Elizabeth Fraser as vocalist, the Cocteau Twins signed to 4AD in 1982 releasing their debut "Garlands" later that year. Anchored by a Roland 808 drum machine and Heggie's swooping bass lines, guitarist Guthrie created an atmospheric sound providing a perfect platform for Fraser's remarkable vocals.

Easily the darkest and most straightforwardly post-punk album Cocteau Twins ever recorded, "Garlands" has a spare, desolate, insistently minor-key sound that owes a clear debt to Joy Division; however, what keeps the proceedings from sounding derivative are Robin Guthrie's spiraling guitar textures (far more primal than on future albums) and Elizabeth Fraser's vocals, which somehow manage to evoke beauty and dread simultaneously. While the album suffers a bit from the use of a drum machine and several songs that are overly repetitious (something rarely found on their later albums), "Garlands" manages to create a sound that, while not indicative of where Cocteau Twins were heading next, still played an important role in defining the 4AD sound of the early 80s.