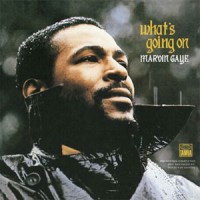 By 1970 Marvin Gaye was already a phenomenally successful singer, with a string of hit singles to his name, making him Motown's number one male performer. However, when he entered the Hitsville studio on June 1st to cut a new single, Marvin hungered for more. All over the world social unrest was prompting political activism and cultural revolution. Yet the Motown hit production line carried on like nothing was happening. Marvin longed to make a statement that would reflect the new reality, so when Al Cleveland and The Four Tops' Obie Benson brought him the framework of a song called "What's Going On", he jumped at the chance to record it. Initially rejected by Motown, the track went on to become a runaway smash, and the label demanded a full length LP to capitalize on sales. Recorded in ten days in March 1971 the "What's Going On" album features co-writing credits from awesome session band the Funk Brothers, as well as brass and string arrangements by David Van De Pitte. The heady mix of percussive-heavy grooves, luxurious fills and Marvin's sweet vocals became an instant classic. Taking in themes like the Vietnam war, poverty, spirituality and green issues, the album seems just as relevant today as it did back at the start of the 70s and deserves the vote as 'greatest album ever' that it often receives.