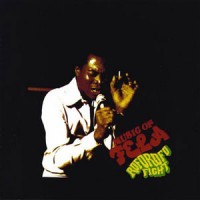 This is essentially a CD reissue of Fela Kuti's 1972 album "Roforofo Fight", with the addition of two previously unreleased tracks from the same era. It's true that Kuti's early-70s records tend to blur together with their similar groupings of four lengthy Afro-funk jazz cuts. Each of the four songs on "Roforofo Fight" clocks in at 12 to 17 minutes, and there's a slight slide toward more 70s-sounding rhythms in the happy-feet beats of the title track, and the varied, yet rock-solid drums in "Go Slow". There's just a hint of reggae in "Trouble Sleep Yanga Wake Am", in the pace, vocal delivery, ethereal keyboards, and lilting yet dramatic minor melodic lines. The James Brown influence is strongly heard in the lean, nervous guitar strums of "Question Jam Answer". The two bonus tracks - "Shenshema" (from 1972) and "Ariya" (from 1973) - comprised the segment of the CD titled "The Fela Singles" a curious phrase given that they were previously unreleased. "Shenshema" is a nine-minute cut that is heavy on go-go-like percussion and cool, responsive chants from the band. The 10-minute "Ariya" is a real discovery, its urgent spy theme-like melody and Kuti's haunting, driven vocals making it a highlight even relative to the generally high quality of his recordings during this period.