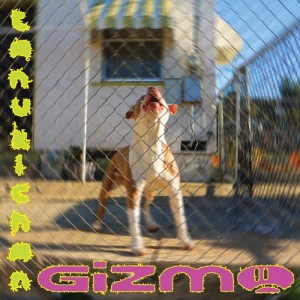 Five years since her last album ‘Sundays’ Tanukichan is back with the follow up…’GIZMO’.

It's a heady mix of fuzzed out guitars, shoegaze and wall-of-sound alt-rock.

When the pandemic hit, Hannah van Loon adopted a dog named Gizmo, who became a much-needed companion while the Bay Area musician wrote her second album as Tanukichan. Aptly Named after her new four-legged friend, GIZMO is an exercise in release, whether from situational hindrances—a forced lockdown, for one—or from self-imposed hedonistic coping mechanisms.“ A theme I always had floating around was escape,” van Loon explains of her follow-up to 2018’s Sundays. “Escaping from myself, my problems, sadness and cycles.”

To channel the more uplifting spirit she wanted for GIZMO, van Loon turned to the radio pop-rock of her childhood: “I was struck by the in-your-face positivity of the lyrics,” she adds,referencing artists like 311, The Cranberries, and Tom Petty. “I wanted to bring that positivity while writing about the sad and helpless emotions I’d been grappling with.” But GIZMO’s lightheartedness doesn’t make it shallow: “I think that I could let it go, as beautiful as snow,” she murmurs on “Don’t Give Up,” a nu metal-meets-Cocteau Twins groove about the sudden awareness that all the relationships you depend on could vanish instantaneously. Van Loon’s main collaborator on GIZMO was Toro y Moi’s Chaz Bear, and the jangly pop earworm “Take Care” showcases the heavily distorted, in-your-face guitar work reminiscent of Bear’s own psych joints What For? And Mahal. On the hypnotic, wall-of-sound-rocker “Thin Air” featuring Enumclaw, van Loon channels the triumphant grit of The Smashing Pumpkins as she ponders the impermanence of even the most impactful relationships: “I’ll always have the memories/Of how you used to make me see/Until they fell in the ocean/They’re not swimming/They’re not floating.”

Existentialism aside, GIZMO also sees van Loon break out of her sonic comfort zone. “One ofthe main changes of how I’m approaching music now is that I want to have more fun in the process,” she says, and she walks the line between melodrama and whimsy gracefully: “I can learn something because I’ve been here before,” she sings on the soaring, bittersweet “Been Here Before.” Deftones-inspired thrash drums and screeching electric guitars are gracefully contrasted with van Loon’s hypnotic, almost deadpan vocal style and a crystal clear acoustic guitar she describes as “cute.” Gizmo the dog suddenly passed away right as van Loon finished the album, but he’s immortalised with his photo on the cover—a fitting emblem of this new era of Tanukichan.