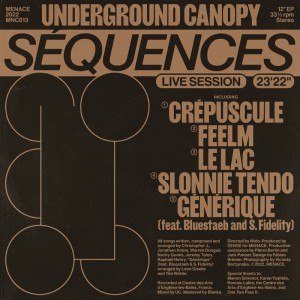 After the release of their critically acclaimed first album " Bluestaeb & S. Fidelity Present Underground Canopy " (MENACE - 2020), Underground Canopy (UC) was able to take time, due to the unforeseen period of doubt in 2020, to craft new compositions with a fresh approach. Throughout this forced period of introspection, the Parisian band experimented with more refined musical codes and colorful sounds.

Following the new additions of Raphaël Henry on drums and Christopher Johnson on electric guitar, UC was able to record and film a live rendition of four original pieces at the end of 2020, thanks to an invitation by the Centre des Arts d'Enghien-les-Bains's artistic program and SENSE. These music videos, each filmed in one shot by Romain Lalire, capture UC's musical digressions away from their mainly hip-hop and groove-infused jams and into new territory.

The resulting new EP "Séquences : Live Session" celebrates cinematic aesthetics and the suspension of time. It stands as an audiovisual testimonial to the band's continued progression. In this era marked by uncertainty but full of hope, what will come next?