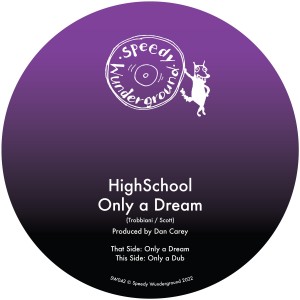 HighSchool – are a Melbourne trio consisting of Lilli and Rory Trobbiani and Luke Scott who make a spellbinding indie-pop sound full of stylish, gothic excess.

Having spent 2021 dropping great singles with stunning, band-made accompanying videos, they finally released their infectious six-track debut EP, entitled ‘Forever at Last’, at the end of the year to much acclaim… (“A sprawling and gorgeous thing” - NME, "Unashamedly hook-driven art pop elation” - So Young, “Potent indie pop that recalls early Beach Fossils, aspects of The Cure, while channelling elements of The Go-Betweens, but really they are forging fresh paths, and laying claim to a sound of their own” - Clash Magazine). With people hooked, the first 12” pressing sold-out immediately (released as part of the Dinked series) and the gig bookings flew in.

Now based in London, they’ve wasted no time getting to know their new home, playing shows with CHVRCHES, Mitski, NewDad and Wet Leg, as well as various UK festivals including All Points East, End of the Road, The Great Escape, Manchester Psych Festival, Sea Change, Standon Calling and Visions. The second half of the year sees them tour Europe for the first time as well as their first headline tour of the UK. Shows in North America and back home in Australia are scheduled for 2023. ‘They’re like the perfect amalgamation of all my favourite bands,’ says Speedy co-runner Pierre Hall after catching one of their early Great Escape Shows. ‘We met up with them when we got back to London and asked them to play our compilation launch a few weeks later. They fitted in perfectly and just felt like family straight away.’

Having spent July writing in Sicily, the band returned to the studio to work with Speedy Boss Dan Carey. Recorded as always in one day the fruits of these sessions is the anthemic ‘Only a Dream’, a track known to fans as the band’s set closer. It’s gloriously catchy pop and the perfect addition to the influential label’s seminal single series, ‘an instant classic’ says Hall.

Talking about the track, the band said, “The process of making a song – from composing to recording to releasing – usually takes us ages. We labour every detail and do like 30 mixes before we’re happy. In this sense, working with Speedy has been a revelation. Completing the recording of an entire song in one day and completing the mix the next day was liberating. It taught us to be economical and concise, and not to sweat the small stuff. Dan is a total visionary and an absolute pleasure to work with. We’re super stoked with the result.”