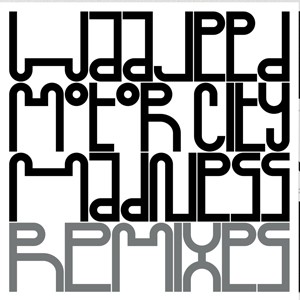 Heralding the release of "Memoirs Of Hi-Tech Jazz", the new album by Detroit-born-and-based artist, Waajeed; this 12” features further examinations of the lead track by the vaunted Detroit collective, Underground Resistance; Zambian producer SHE Spells Doom; and a special reimagining by Waajeed himself featuring live drums.

Alongside the 12" version the three remixes further explore the links between techno and jazz, styles both founded on African traditions that make commentary on the present but are always oriented to potential hereafter.

On the People Mover remix, Waajeed enlists the talents of Zo!, Tall Black Guy, Michele Manzo, and more to explore one extreme of the track’s musical heritage. Syncopated drums, driven by a full and bright snare drum, firmly place this version in the sphere of contemporary jazz emanating from Detroit and cities across the US.

Coming from an album inspired by revolutionary efforts against oppression in Detroit and in Black locales around the world it is entirely fitting that Underground Resistance should provide their take on "Motor City Madness". UR’s Mike Banks follows the lead of the original’s melange of genres. By thickening the bassline, peppering the mix with extra brass from the Mad Brass Horn Section, and adding strings courtesy of Six Mile Strings, UR further explore the dynamic intersection of music, history, and geography.

SHE Spells Doom closes the remix package with his second release on Tresor after his contribution to 2021’s "Tresor30" compilation. The Zambian artist trims "Motor City Madness" down to the bones of the brass section and infuses them with a gqom beat, simultaneously referring to jazz and techno’s deepest roots in Africa, as well as suggesting where they might be headed in the future.

Matt says: A nicely curated remix package to accompany the album also out this week. Detroit's Waajeed has won an army of loyal fans through his jazz-informed dance style that's uniquely his own. The four remixes are all top drawer, it's hard to pick a favourite! And what coup getting Detroiters UR up in there too. Check!