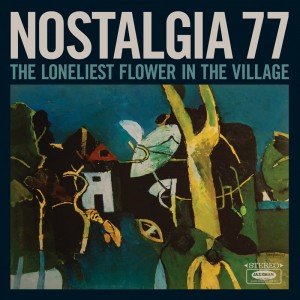 For the past 20 years Nostalgia 77 has become a catch all for the musical life of Benedic Lamdin. His schizophrenic offerings range from songwriting sessions, soundtracks, excursions into Soul and in this case Jazz. The Loneliest Flower in the Village is an album that sees Lamdin reunited with longtime collaborator and arranger Riaan Vosloo and experienced veterans from a host of Nostalgia 77 projects.

'It had been a long time since we'd gigged or recorded so the idea was as much a little reunion in the studio as any grand plan to record an album' says Lamdin. 'The idea wasn't to do anything new (the material is both a few originals and a few covers), more just hear these players and their easy familiarity with each other after the disruption of Covid'.

Playing a clutch of originals by Riaan Vosloo and James Allsopp and covers by long term influences from South Africa such as Chris MacGregor and Abdullah Ibrahim, the emphasis is on strong melodies and open reaches for the soloists. The title track draws upon the song written by South African bassist Johnny Dyani and the result is spectacular; British jazz at heart but awash with references to South Africa and its strong jazz heritage.

'I'm pleased to say that I think this record is the best account of how the band (playing in this lineup since about 2010 ) sounds live. Full of energy and ranging from serene to firing on all cylinders.'