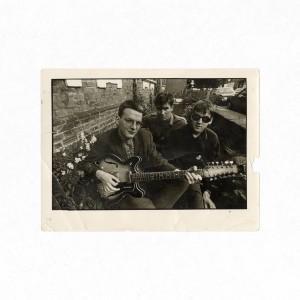 Swell Maps / Television Personalities affiliated C86-era indie pop rescued from sheer obscurity and thrust into semi-obscurity by FELT. The Catburgers were a short-lived Scottish group, this recording initially primed for release on Dan Treacy’s Dreamworld imprint yet placed on the perennial backburner as so many creative projects inevitably are.

Soundcloud uploads dating back over a decade ago and the odd blog/twitter post aside, the group seemingly lived on only in the memories of those who happened to catch them on the Edinburgh scene back in the day. Until now! With the help of the National Sound Archives, the original master tape containing these three tracks has been rebaked, cut and mastered for seven-inch.

‘Holiday House’ sounds immediately at home in the Postcard Records nexus, the influence of 1980 particularly tangible. Slower paced and with a touch more melancholy than its companions, the song sounds both in and out of time, as if some young teens raised on a hand-me-down diet of Pastels CDs might have laid it down yesterday.

Jowe Head of Swell Maps joins the group for ‘The Acid Tree’, whilst EP closer ‘Diving For The Brick’ sees the band ruminating on weak knees, sore lungs and stinging eyes down at the local swimming pool.

Accompanying the release is the original demo tape predating this record, recorded at The Rocking Horse Studios in Bathgate in Autumn 1986. The demo is restored from a tape copy owned by journalist Simon Reynolds and contains some of the tracks that made it onto the 7".

Matt says: Seriously obscure lo-fi indie here which is an absolute treasure to behold. If you liked (equally obscure) Indifferent Dance Centre, or anything on Postcard Records you seriously need to check this quaint little number. "Diving For The Brick" wins genius lyrics of the month award by a long shot.