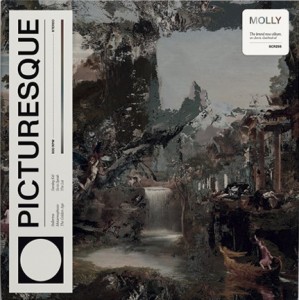 The album’s seemingly brief tracklisting belies a work of great beauty and depth, and one which turned into a one-man crusade for singer/guitarist Lars Andersson, intertwining deeply personal stories with his love for the era of Romanticism.

“Every time I go to a museum and I’m about to pass through the era of Romanticism I stop in awe,” says Lars of the enduring appeal of the 18th century artistic movement. “Whatever it is – stories, paintings, music – it triggers something deep within me, something profoundly human.
It really hits a nerve, and it utterly immerses me to a point where I can’t move.”

The album replicates this feeling; a gloriously over-the-top blend of Slowdive and Sigur Rós, mixed with the single-mindedness of Daniel Johnston and the noisiness of Nirvana, it’s as bold and beautiful and every bit as ornate as the art that inspired it.

Unlike their acclaimed debut, 2019’s All That Ever Could Have Been, which gradually came into focus with a 15-minute opening track, Picturesque hits home from the very first note of the short and sweet opener, ‘Ballerina’. That’s not to say there aren’t epics here – ‘Metamorphosis’ is essentially a 12-minute suite of three movements; blistering closer ‘The Lot’ is 11 minutes of Swans-inspired heaviness – but everything is much more direct and focused. This isn’t an album to lose yourself in, it’s one to get swept away by.

“‘More is more’ was definitely the credo when making this record,” agrees Lars. “A big inspiration were bands like Pond and the way they manage to fill their songs up with stuff to the absolute maximum. While I definitely tried to give the listener some room to breathe at certain points and while, in good old post-rock fashion, it still builds up and breaks down, it relies much more on simple melody and harmony as opposed to noisy experimentation to transport feeling.”

Never more so than on the first single, ‘The Golden Age’, which is the album’s centre-piece; a soaring slice of über-shoegaze that is so stunning you can’t take your eyes or ears off it.

Like all the songs on the album, it’s based around a fairy-tale from the Romantic era. In this case, it’s Heinrich von Ofterdingen by the German poet, author and philosopher Novalis (other influences are: The Steadfast Tin Soldier by Hans Christian Andersen; The Seven Ravens and Hans in Luck by the Brothers Grimm; Undine by Friedrich de la Motte Fouqué and The Golden Pot by E.T.A. Hoffmann), with Lars drawing parallels between the titular character’s mystical and romantic searchings and his own personal quest.

This is apt as the album has been an overriding obsession for Lars for the past two-and-a-half years; as well as writing and recording the songs (bandmate Phillip Dornauer played drums), he also mixed and mastered them at his Alpine Audio studio and Picturesque is very much his Brian Wilson or Kevin Shields moment. MOLLY were in the middle of their European tour when Covid hit in early 2020, forcing Lars to retreat back to his home outside Innsbruck and giving him time and space to think about every detail of the record.

“Well, I was on a quest I guess,” he admits. “Like everyone, I was stranded at home and at some point I just said to myself, ‘If not now, then when?’ It was an intense process. I’ve worked on music from other bands and artists before but producing and mixing your own music is an utterly different animal. It was probably the most intense thing I’ve ever done, but it was also incredibly rewarding and the feeling of it all coming together piece by piece is incomparable.”

The artwork is just as effective. “I think of Radiohead’s OK Computer – what you hear on the record is what you see on the cover,” explains Lars. “We were inspired by what we call ‘wimmelbilder’ [hidden pictures] in German, a very specific style in art where there are a lot of little things happening. When you see it from further away, it looks organic like a lost painting from the area of Romanticism, but the closer you look the more digital it gets. It’s a nice analogy.”

He’s right, it perfectly sums up the conflict between Romanticism and 21st century life.

“Romanticism was basically an answer to the Industrial Revolution as well as the social and political norms of the Age Of Enlightenment,” concludes Lars. “Now, we all live in a much more industrialised, materialistic, individualistic and sterile society than any early Romanticist could have ever possibly imagined. Over 200 years later the Romanticists have lost the battle.”

With the divine and downright pulchritudinous Picturesque, MOLLY begin the fightback.

MollyAll That Ever Could Have Been