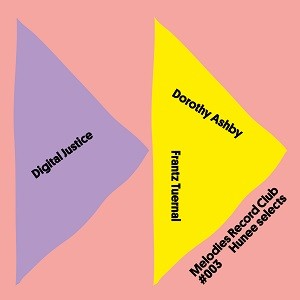 In his own words: « These three distinct pieces of music tap into different layers of my memory. One being part of the imagination, the other two rooted in the memories of a special morning in the woods of Houghton (and other times and places). On one side we have a beatless ecstatic piece of electronic music by Digital Justice called Theme From ‘It’s All Gone Pearshaped’. Originally released in 1994 on Rob Gretton’s (ex-manager of Joy Division and New Order) label Robs Records, Pearshaped is a 13 minute live jam from two friends messing around in a loft studio full of synths, inadvertently creating magic that can “take many shapes and forms in the hands of a DJ and the movement of a dance floor, whilst its harmonic counterpoint shines through the wildest mixes and combinations”

On the flip, we have Dorothy Ashby’s spiritual piece featuring Koto and spoken word “For Some We Loved” from her classic album “The Rubáiyát Of Dorothy Ashby” originally released in 1970 on Cadet and Frantz Tuernal’s “Koultans” originally released in 1986 by l’AMEP (Association Martiniquaise d’Enseignement Populaire) which was also a school in Martinique. “After dancing to a set from Cedric Woo at an intimate, after-closing dance party at Brilliant Corners called “Freedom Suite” which completely re-calibrated my sense of experiencing and dancing to music, I went home and immediately searched through my collection for music to listen to and potentially play with these new found sensitivities - the very physical experience of music, the pulling force pushing one into the transcendence of time and space. Dorothy Ashby’s „For Some We Loved“immediately took me back to that feeling and opened up in front of me an otherworldly-world through it’s free flowing polyrhythms and sparkling Koto playing. I have yet to play my own „Freedom Suite“night, but I hope when that moment comes, I can give back what I have received back then, and „For Some We Loved“is a first step in trying just that.”“I have been shown Frantz Tuernal’s privately pressed 12“containing „Koultans“ by my trusted music friend Nicolas Skliris from Paris a few years ago. An unlikely piece of music (a Zouk song with flamenco-inspired guitar playing) from Martinique that was both a highlight back at Giant Steps when I played the song 3 times in a row in the early morning, and a few weeks later in the woods of Houghton where a few thousand dancers were deeply moved to its melody, when the sun came up in the morning and started descending upon the lake behind the DJ booth, bathing the smiles upon the dancers faces with its reflection.”

A1. Digital Justice–Theme From “It’s All Gone Pearshaped”
B1. Dorothy Ashby–For Some We Loved
B2. Frantz Tuernal-Koultans