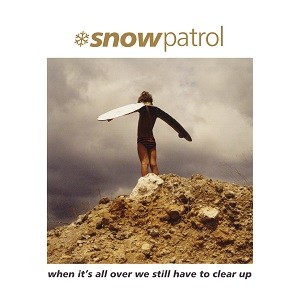 In celebration of the 21st Anniversary of Snow Patrol’s second album, they are releasing the vinyl LP When It’s All Over We Still Have To Clear Up, now with the original artwork for the first time. Originally released on 12th March 2001 on CD only, a limited edition was finally released on vinyl format in 2019 with adapted artwork. Now, it is being made available with the original artwork.

The second album by Snow Patrol was written and recorded by the three original members: Gary Lightbody, Mark McClelland and Jonny Quinn and also features members of Belle and Sebastian on some tracks. The singles released from the album at the time were ‘Ask Me How I Am’ and ‘One Night Is Not Enough’ but the star track from the album ended up being ‘An Olive Grove Facing The Sea’ which was favoured and supported on radio by both Zane Lowe and Colin Murray.

The album was a follow up to their critically acclaimed debut ‘Songs For Polarbears’ released in 1998. It was recorded in November 2000 at Substation in Cowdenbeath, Fife, Scotland with Michael Brennan Jr as producer.

1. Never Gonna Fall In Love Again Ask Me How I Am
2. Making Enemies
3. Black And Blue
4. Last Ever Lone Gunman
5. If I’d Found The Right Words To Say Batten Down The Hatch
6. One Night Is Not Enough
7. Chased By... I Don’t Know What
8. On/Off
9. An Olive Grove Facing The Sea
10. When It’s All Over We Still Have To Clear Up Make Love To Me Forever
11. Firelight