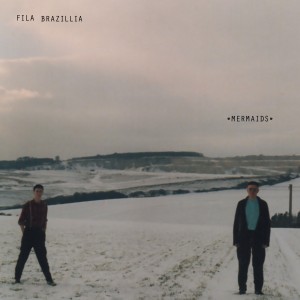 "Mermaids" is many things at once: The debut single by Fila Brazillia (named after the mishearing of a Brazilian mastiff breed mentioned on the radio), the second release on Pork Recordings, a deep house master piece, the brainchild of the summer of love, a pen friend to A Man Called Adam’s "Barefoot in the Head" and most of all pure Balearic bliss. Originally released in 1991 and subsequently featured on "Old Codes, New Chaos", which according to Frank Tope at Mixmag, is 'the Best Dance LP ever made', it marked the beginning of a long and illustrious partnership for Hull natives Steve Cobby and David (Man) McSherry.

"Mermaids" still sounds as good and as addictive on any kind of beach or natural environment as it supposedly did on Boris Dlugosch’s Front dancefloor or any other basement suffused with strobe lights at the time (or any hedonistic place for that matter). Having been already part of the latter’s and Klaus Stockhausen’s Mastermix Front Compilation, it has now been dusted off and remastered for an individual performance. Added for the first first time though is the original demo version that makes use of a different yet not less enchanting bass line.

Also included is Fila’s 1994 trippy, dare we say progressive, UK house blueprint "Slacker". A seismic shift from the traditional tropes of house, it set an example for what should rock the dance music boat just a few years later. Delivered in a previously unreleased extended version for your utmost enjoyment.

Artwork note: The sleeve photograph is a proto-selfie taken by Steve in 1983 (the year the two first met). Man still has those braces.