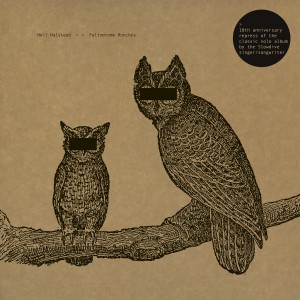 Slowdive singer and songwriter’s third solo album, which was originally released in November 2012. It is a stunning record and one which, upon its release, underlined the claims that Neil was one of the finest and most underrated British songwriters of recent times. It’s also a very special release in the Sonic Cathedral catalogue; the shoegaze label licensed the record from Jack Johnson’s Brushfire imprint for the UK and Europe and it was the start of a relationship that also gave us the Black Hearted Brother album in 2013 and, ultimately, brought about the reformation of Slowdive in 2014. But Palindrome Hunches is a very different beast.

Both stately and understated, this moody and mesmerising collection of peculiarly British folk songs was made with the Band of Hope, a Wallingford, Oxfordshire based collective consisting of Ben Smith (violin), Drew Milloy (double bass), Paul Whitty (piano) and Tom Crook (guitar). Together with producer Nick Holton, banjo player Kevin Wells and backing singer Aimee Craddock, they recorded the album to tape over a few weekends in the music room of their local junior school.

“At first we were going to record in a studio, but everything seemed too clean,” said Neil at the time. “We just went through the songs and recorded them live without very much rehearsal. We wanted to be spontaneous and simple and to keep the little mistakes that sneaked in.” This goes a long way to explaining the album’s humanity and intimacy, and also why it has had a quiet life of its own over the past decade, gradually growing in stature alongside Neil’s more high-profile activities with Slowdive; copies of the 2012 original and even the 2017 repress currently fetch up to triple figures on Discogs.

The stunning opener ‘Digging Shelters’ was used to devastating effect in the posthumously released James Gandolfini movie Enough Said – a fitting home for a song that rubs shoulders here with ruminations about love and loss such as ‘Tied To You’ and ‘Spin The Bottle’ and, on ‘Wittgenstein’s Arm’, an Austrian pianist who had his right arm amputated in World War I and lost three of his brothers to suicide. The wordplay of the title track is almost light-hearted in comparison; “I wanted to write a song that was the same forwards and backwards, but it didn’t quite work out,” explained Neil, adding that he also chose ‘Palindrome Hunches’ for the album’s title because “I like the idea of things being reversible”. A couple years later, by reforming his old band, he proved that. And now, ten years on, it’s the perfect time to rewind to this understated, underrated classic.


Praise for Palindrome Hunches on its original release:

“Nope, it ain’t shoegaze as it's been codified and re-codified. But why be disappointed in someone following his muse to a logical conclusion when that path was always the one he walked on?” – Pitchfork

"An exquisite set of dark folk music” – The Times

“Given the chance, they could be songs that continue to enchant for many years to come” – The Line Of Best Fit.

Side A
1. Digging Shelters
2. Bad Drugs And Minor Chords
3. Wittgenstein’s Arm
4. Spin The Bottle
5. Tied To You
Side B
1. Love Is A Beast
2. Palindrome Hunches
3. Full Moon Rising
4. Sandy
5. Hey Daydreamer
6. Loose Change