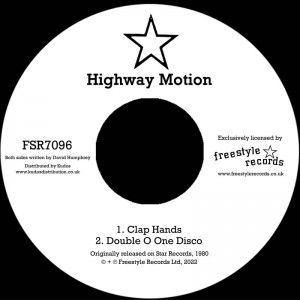 Freestyle dig out another rarity in the form of a DIY brit-funk 7" from Highway Motion aka David Humphrey (a session drummer who played with Sparks, and with PiL on the iconic Metal Box LP & Death Disco 12"). Tinged with raw post-punk edge and 70s library music-style synth leads, this 45 is quite simply massive amounts of fun.

David Humphrey's professional career as a drummer began aged 19 with Public Image Ltd, providing some of the drum tracks on their iconic Metal Box album and Death Disco single. Humphrey would then go on to work with Mike Oldfield and then Sparks, playing with the latter on their Number One Song in Heaven tour, Top of The Pops and recording sessions for Beat the Clock and Tryouts for the Human Race (those sessions were included and featured in Edgar Wright's recent film The Sparks Brothers).

In 1980, Clap Hands and Double O One Disco were recorded under the name 'Highway Motion' - intended by Humphrey as "raw experimental tracks" they were both laid down on a 4-track and subsequently released on the DIY Star Records imprint. Rough, grooving, candid and playful; these two tracks seem to somehow simultaneously meld the burgeoning brit-funk sound of the early 80s with a riotous post-punk edge, along with a good dollop of synth-led library music.

Following it's release David formed the group Reflex, recording and releasing the Funny Situation 7" in 1981 - forming the only other title in the Star Records catalogue. A more straight-up brit-funk dancer yet still pressed and sold in small quantities, Funny Situation became a sought-after record on the second hand collector's market, and finally saw reissue last September 2020 on the start-up Paint A Picture label - garnering plays from from Gilles Peterson on BBC 6 Music and Worldwide FM, StreetSounds radio and reaching No 1 in Juno records Chart. David has now started to working on new music using the name Davey H, and released his first new material in decades recently on Six Nine Records.