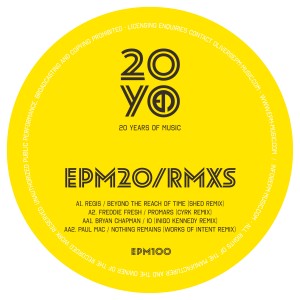 For EPMmusic's 100th release they're throwing it back to another milestone. Last year, EPM celebrated 20 years in the business with a series of vinyl EPs and a compilation. Now they've enlisted Shed, CYRK, Inigo Kennedy and Works of Intent to remix some of those 'EPM20' tracks.

On the A-side, the highly acclaimed and always uncompromising Shed (one of the many aliases of Berlin's René Pawlowitz) delivers a raw and tribal take on Regis 'Beyond The Reach Of Time'. From one legend to a current electro phenomenon CYRK, fresh off the back of their collaborative 'Freundschaft' album on Burial Soil turn their hand to Freddie Fresh's 'ProMars' adding their own style of tuff 'lectro funk.

Flip over for one of the UK's techno warriors, Inigo Kennedy, as the Asymmetric man goes all out on his ominously epic and bass laden remix of 'Io' by Bryan Chapman. To close the EP is UK electronic artist and DJ, Works of Intent (f.k.a. R.O.S.H) with a twisted remix of Paul Mac's 'Nothing Remains' bringing in elements of rave, breaks and sci fi sonics.

Matt says: Been a while since we've had a proper techno record blow our balls off. Queue EPM with another instalment of their 20th anniversary series. If your nethers are intact after that Regis opening blow; I'm sure the remaining three wrecking balls should have you scanning the underwear section of Primark pretty pronto.