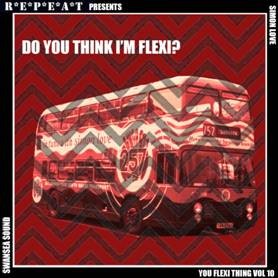 The latest in underground label R*E*P*E*A*T's series of bendy compilations is released to mark a gig in Swansea on 17th September. This will see Swansea Sound play their first ever Swansea gig; more remarkably this will be the first ever time that the band's Hue Williams, one time Pooh Stick and long time musical mover and shaker, has played his home town. His bandmates, in what has been dubbed an 'indie super group', include Amelia Fletcher (singer in The Pooh Sticks and also ex- Talulah Gosh and Heavenly.They are joined on the flexi by Simon Love who has contributed a rarely heard track from from his days with Simon Love and the Old Romantics.