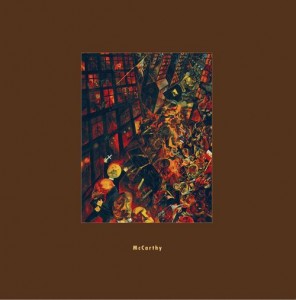 Double album set contains the original LP plus 13 bonus tracks taken from their first four singles and the re-recorded version of In Purgatory which originally appeared on the PINK compilation E.P “It sells or it smells” plus bonus 7” a reproduction colour vinyl copy of McCarthy’s first 7” “In Purgatory”
All three tracks have been remastered from the original master tape and presented in a wraparound sleeve, just like the incredibly rare “Wall Of Salmon” original.

By the time McCarthy appeared on the NME’s C86 cassette they had already been playing together for a couple of years and released two excellent singles. Their debut “In Purgatory” and the indie masterpiece “Red Sleeping Beauty” (both included on this release). The following year McCarthy released the brilliant “Frans Hals” before unleashing their debut album “I Am A Wallet”

Now recognised as an indie pop masterpiece it has gone on to achieve cult status, receiving praise from the likes of Nicky Wire (Manic Street Preachers) as one of the most important albums of the 80s. Known by today's indie acolytes as the band that spawned Tim Gane and Leititia Sadier (who of course went on to form Stereolab).

It’s a seamless album reminiscent of the Byrds. Wonderful, if slightly twee, jangly guitars with complex and rarely rhyming lyrics, Malcolm Eden’s strident left wing political views are manifest on I Am A Wallet. Cloaked in pretty guitar and propulsive drums, Eden sets about attacking the pillars of the day, MPs, Prince Charles, Fleet Street, religion, the response to AIDS and on almost every song, capitalism. The horrors and inequalities of the capitalist system are laid bare for all the see. The system which enables some to get rich at the expense of others is reviled and attacked.