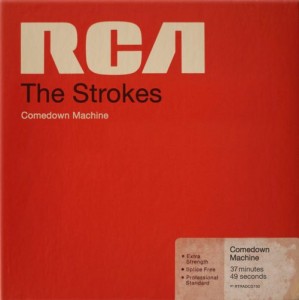 "Comedown Machine" is the fifth studio album by American rock band the Strokes. It was released on March 26, 2013, through RCA Records. The band decided to pull a media blackout for the album, with no promotion in the form of television appearances, interviews, photoshoots, live shows, or tours. The cover artwork was designed to resemble an old RCA tape reel box. "Comedown Machine" received mostly positive reviews from critics, and was placed at number 41 on the NME's list of the "50 Best Albums of 2013".