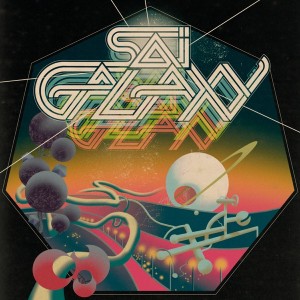 As the name suggests, Sai Galaxy represents a star-studded cluster of artists from around the world - their varied styles colliding to form a refreshing fusion of classic Afrobeat, disco and West African funk

Drawing from the influence of 70s and 80s Nigerian artists such as Nkono Teles, Jake Sollo and Mike Umoh, the Sai Galaxy collective is on a mission to reproduce the analogue warmth and groove from those decades. Consequently, they lean heavily on 70s production techniques - free from the predictable rigidity of digital sequencing.

While the EP seeks to reflect 70s production, glimpses of contemporary elements can be found in the arrangements and harmonies, at times reminiscent of modern artists such as Lord Echo, Bosq and Voilaaa.

As Durrington believes: 'dance is vital to health and community'. And with an EP that urges you to dance from start to finish, consider Sai Galaxy a cosmic tonic for the modern lifestyle. There's also some serious bass weight on the vinyl, meaning the record's gonna more than cut it in the dance.

For fans of: Kiki Gyan, the "Doing It In Lagos" compilation, Flamingo Pier, Khruangbin, the Space Grapes label, David Mancuso. And yes, it really is that good!

Matt says: Stupidly strong, modern afro-disco here from an all star cast of musicians. Hard to pick a favourite track they're all that good! Impressive vinyl pressing too - proper weighty. I like!