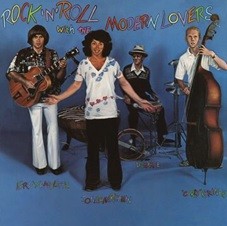 While his desire was for his band to be more of an acoustic/harmony based endeavor, Jonathan was blindsided when his true debut was overtaken by a compilation of early recordings. Singles like “Roadrunner” and “Pablo Picasso” were in the forefront – but that did not deter Jonathan. After original drummer David Robinson left, (eventually finding success with Hall of Famers, The Cars), Richman hired D. Sharpe, and the band recorded and released the aptly titled Rock ‘n’ Roll With The Modern Lovers.

Now, one might wonder how “rock ‘n’ roll” and album with songs titled “Ice Cream Man,” “Dodge Veg-O-Matic,” and a version of “Wheels On The Bus” is – but, Greil Marcus called it “the purist Rock and Roll album I’ve heard this year.” And, due to the UK fascination with the band’s perceived debut, “Egyptian Reggae” hit #5 on the singles charts! The date is 1977. Revel in where the “real” Jonathan Richman story started, and how it evolves.